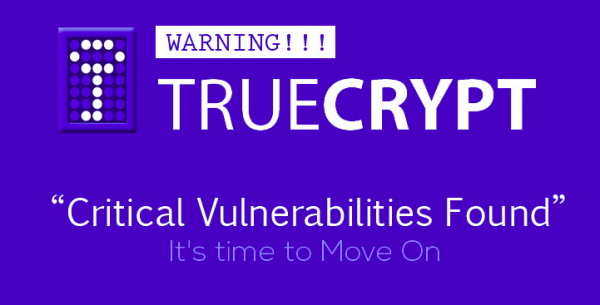 Serious vulnerabilities were detected by Google zero-day researcher, James Forshaw, if an attacker has physical access to a device with TrueCrypt installed. While these security flaws don't allow an attacker to decrypt data directly, they can be exploited to compromise a machine, install spyware and to record password keystrokes – ultimately enabling an attacker to figure out a TrueCrypt user's decryption key.

Even though security engineers performed an audit of TrueCrypt which covered the driver code, they missed the following, which were detected by Forshaw:

Why did we recommend TrueCrypt in the first place?

Last year, however, TrueCrypt developers mysteriously announced an end to the development of this software, quoting “unfixed security issues”. The reasons for this remain unknown and have been subject to some debate and speculation.

We nonetheless continued to recommend TrueCrypt because:

However, given that TrueCrypt is no longer maintained, the recently discovered bugs won't be fixed directly in the program's code (but will be in VeraCrypt, see below). Furthermore, the last version of TrueCrypt is now out of date and getting increasingly awkward to install on current operating systems.

The closest tool to TrueCrypt currently available is one of its forks, VeraCrypt. Like TrueCrypt, VeraCrypt is * open source * and independently audited. VeraCrypt 1.15 was recently released and addresses the TrueCrypt vulnerabilities that were detected by Forshaw. CipherShed is another project that promises to improve on the TrueCrypt source code, but it is still some way off being released.

Another option is to use encryption built in to your device operating system, such as BitLocker on Windows and FileVault on Mac OS X. These are very simple to use as they can be activated in the settings menu of your operating system. However, BitLocker and FileVault are proprietary tools, they haven't been audited and there is no guarantee that either company's tool has not been compromised by government agencies.

The table below shows some of the features for some TrueCrypt alternatives:

Depending on their threat model and/or interest in trying out a different operating system, users can also consider switching to Linux for full disk encryption. The advantage is that - unlike BitLocker or FileVault - Linux's full disk encryption is open source. And as we learned from the latest report on TrueCrypt's vulnerabilities, it's important that the source code of the tools we use is open for review by engineers and researchers around the world.